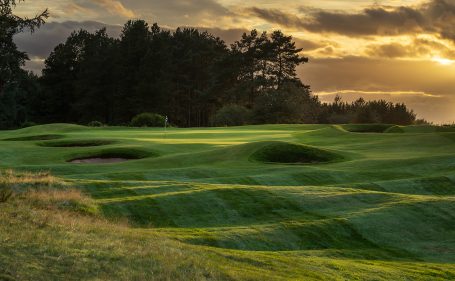 Like London buses, when you’re waiting for a world first, three will inevitably come along at once. So it is at Forfar Golf Club, where 149 years of golf has secured a trio of little-known firsts that have nonetheless shaped the game around the world.

The club is now actively promoting its historical credentials in an effort to ensure the much-lauded championship course receives the recognition it deserves. To support its endeavours, the club contacted prominent golf historian Neil Laird who believes Forfar represents a watershed moment in golfing history.

“It is the oldest 18-hole course in continuous existence,” explained Neil Laird, who set up the website www.scottishgolfhistory.org which attracts over 1,000 visitors a week, and is a member of the British Golf Collectors Society. “Forfar is the earliest example of Old Tom laying out 18 holes and therefore marks a milestone in golf history.”

He continues: “At Forfar, you have the beginnings of the idea of laying out a course where every hole is different – that is what people try to do now. Forfar is the earliest 18-hole course designed by the master [Old Tom Morris] that looks like a modern course. It goes right back to the very beginnings of 18-hole golf courses – Forfar was at the forefront.”

Although there are older courses that have either been extended or cut to 18 holes, Forfar was the first to be designed by a recognised architect with 18 holes from the outset; a world first also referenced in the book Why are there 18 holes by Peter Lewis. Established in 1871, the course was laid out by Old Tom Morris with 13 of his original greens still in play today.

Forfar is managed by one of Scotland’s most celebrated amateur golfers who recently had the honour of being appointed captain of the Great Britain and Ireland men’s Walker Cup team. Managing secretary Stuart Wilson said the role played by Forfar in the development of golf needs to be recognised.

“The history at Forfar Golf Club can be seen on the walls of the clubhouse and in our trophy cabinet,” he noted. “But perhaps less well known and less obvious is the important and historic role played by the club in creating the first 18-hole golf course by design. Along with St Andrews, Forfar was at the forefront of the development of the game and it laid down a template for future course design.”

Despite its rich history, Wilson believes the club’s pivotal role remains relatively unknown. “We are very proud of the club’s origins and believe the significance of its historic role has been overlooked,” he said. “With our 150th anniversary in 2021 coinciding with the 150th Open in St Andrews, we felt this was a good opportunity to proactively ensure the club is appropriately recognized as providing a key turning point in the development of the game.”

Although the course went on to be re-designed by five-times Open Champion James Braid in 1926, it is Old Tom’s involvement that Laird believes is of greatest significance. “It is an Old Tom course,” he explained. “Although quite a few courses are associated with him, not all were laid out by him. In many cases, his involvement was limited to extending the course. Forfar is the first golf course I have been able to trace where he laid out all 18 holes. That is a milestone in the development of 18-hole golf courses.”

With Forfar due to mark its 150th anniversary in 2021, the club has embarked on a campaign to convey more widely its historical significance. One of the first elements of this strategy was commissioning award-winning golf course photographer Mark Alexander to create a series of images that evocatively capture the layout.

“The course is a fundamental component of the club not only because of its history but also because of the challenge it presents,” explained Wilson. “One of the first steps was to create a gallery of images that adequately captured the unique character of Forfar and Old Tom’s legacy. Mark was the perfect man for the job and he has created some stunning images for our campaign.”

Discussing his recent appointment as captain of the Great Britain and Ireland men’s Walker Cup team, Wilson said: “As much as I enjoyed my time as a player representing GB&I, I am determined to make a valuable contribution to the team as its leader and to help the players both individually and as a group. During my time on The R&A Boys’ Selection Committee, I was able to gain first-hand knowledge of the level of talent that was emerging. It feels like a natural progression to be taking on this role to continue to foster these gifted amateur golfers.”

1) Forfar Golf Club was established in 1871 and is the seventh oldest 18-hole golf course in the world.

2) The course was laid out by Old Tom Morris, with 13 greens remaining in the same position, and was re-designed in 1926 by five-times Open Champion James Braid.

3) Forfar is celebrating its 150th anniversary in 2021 which coincides with the 150th Open taking place in St Andrews.

5) Forfar Golf Club’s managing secretary, Stuart Wilson, played in the Open Championship in 2001 and most interestingly in 2004 when he won the coveted Silver Medal as leading amateur. Earlier that year, he won the Amateur Championship at St Andrews and went on to play at the Masters in 2005. He is now captain of the Great Britain and Ireland men’s Walker Cup team.