To celebrate the 150th Open, Prestwick Golf Club has revived the original 12-hole course that held the first Open Championship 162 years ago. The resurrected layout will be in play for just two weeks during October to mark the moment the Open Championship commenced in 1860.

Based on historical records and detailed maps, the club has recreated the ancient course by reinstating five greens and creating special teeing areas to replicate the routing originally created by Old Tom Morris. Some areas of long grasses have been tempered to facilitate play and specially commissioned wicker flag poles – originally used by the club following its formation in 1851 – will be in situ to complete the look.

The club, which is often referred to as the Birthplace of The Open, hosted the tournament 24 times. The first was contested by eight Scottish professionals and consisted of three rounds of the famed 12-hole course. Willie Park from Musselburgh prevailed beating his rival Old Tom Morris by two shots. The events on that October day lay the foundations for the grandest Major in golf and a sporting spectacle that generates over £100 million in local economic benefits.

“The club is extremely proud of its association with The Open,” explained Ken Goodwin, Secretary of Prestwick Golf Club. “This is where the magic of The Open began one fateful October day in 1860. There had to be a first, and it happened here at Prestwick. To commemorate this historic milestone, it was decided the club should bring back the original routing for a limited time.”

Although this isn’t the first time the club has reinstated the inaugural Open course, it is the most detailed and extensive project of its kind ever undertaken. “Part of the Prestwick experience is walking through history,” says Goodwin. “In the past, the club has endeavoured to bring back the original on only a handful of occasions. This year, however, to mark the 150th, the club was fortunate to have the necessary equipment required to deliver the 12-hole course to a much higher degree of accuracy than ever before. Together with the wicker basket flags, this has been the most thorough revisit and certainly the most eagerly anticipated.”

As well as the heritage surrounding the antique course, the revised layout also forms a remarkable collection of holes that defy logic. Blind tee shots, double greens, crossing fairways and enormous undulations add up to a course quite unlike anything that would be permitted today. Add in the fine links turf and Ayrshire breeze for which Prestwick is famed and the original Open course is as much a conundrum as it is a piece of sporting antiquity.

For golf course photographer Mark Alexander, who was commissioned by the club to create a gallery of images of the historic course, the layout’s idiosyncrasies were as compelling as they were challenging to shoot.

“I have photographed Prestwick before, but this was completely different,” noted Alexander. “Although I was working on the same stretch of Ayrshire coastline in that amazing west coast light, it might as well have been an entirely new course. For instance, working out the green positions and the direction from which each would be played was tricky, but it also opened up new angles that just aren’t relevant on the current layout. It was exhilarating and demanding all at the same time.”

In 2014, Alexander became the first professional photographer to be commissioned by Prestwick Golf Club to capture the spirit of the historic links. For this year’s special commemoratory event, the club once again called on the award-winning specialist.

“When Mark photographed the course back in 2014, that was the first and only time the club specifically commissioned photography of the course,” explained Goodwin, “With the reintroduction of the 12-hole layout, we wanted to record the occasion and so we asked Mark back, which he has done to great effect.”

With only a few remaining places left for the public to play Prestwick in its original form on 18–19 October, this special event is expected to be a sold-out affair. The advice for those interested in journeying back to the origins of The Open is to contact the club directly.

There are few golfing venues more revered than Prestwick Golf Club. After all, Old Tom’s unique 12-hole design was so successful it hosted the first Open Championship within 10 years of its completion. The last Open Championship at Prestwick was held 65 years later in 1925. Ninety seven years on, it became the starting point for an epic 150-mile fundraising march for Prostate Cancer UK completed by Rick Shiels, one of the world’s most watched golf social media stars.

1) Prestwick Golf Club was founded in 1851 by a group of 57 members. It is situated half an hour’s drive south west of Glasgow on Ayrshire’s famous golfing coast.

2) The first Open Championship was held at Prestwick in 1860. The winner was Willie Park from Musselburgh who led Tom Morris, the Keeper of Prestwick’s greens, by two shots.

4) Prestwick hosted the first 12 Open Championships and then held it jointly with The Royal and Ancient Golf Club of St Andrews and with The Honourable Company of Edinburgh Golfers. Prestwick’s 24th and last Open Championship was held in 1925.

5) Only the Old Course at St Andrews has now hosted more Open Championships than Prestwick.

6) Prestwick shares a boundary with Royal Troon, another Open Championship venue. Turnberry is just 40 minutes away and Open Final Qualifying courses such as Kilmarnock Barassie, Glasgow Gailes, Western Gailes and Irvine Bogside are all within a 20-minute drive.

7) Mark Alexander is an award-winning photographer. He works with golf clubs, resorts and tourism organisations across the world. His work also appears in numerous newsstand magazines and websites. 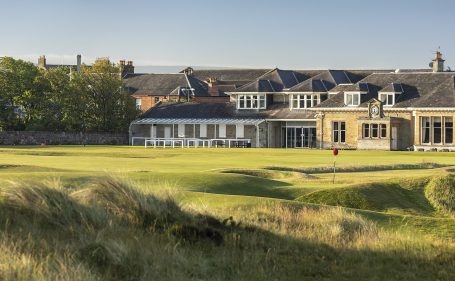