The Past, Present and Future blog looks at what life was like before, during and after Coronavirus. It considers what marketing and communication strategies are being deployed, how businesses are reacting to lockdown and what they plan to do next. The series was created by The Word Association, an established PR and marketing agency based in Fife.

Stephen Simpson and his wife Claire took over ownership of the much-respected West Port Print & Design in St Andrews two years ago. Despite the business coming to an abrupt halt three months ago, the team is preparing for a return to the ‘new normal’, with a little help from the local community. 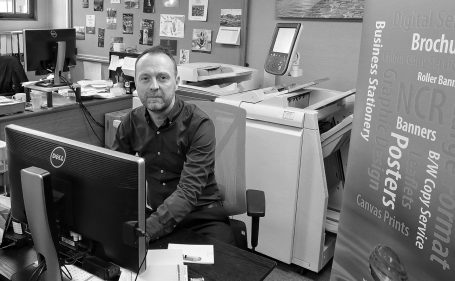 Past –When did the coronavirus start to affect your business?

“We are lucky because as a general printer we cover a lot of products. Our clients come to us not just for brochures or logos or banners, but a lot of different stuff. So when we were going into March, everything was reasonably normal sales-wise with a good mix of jobs. We were aware of what was going on elsewhere in the world and that something was on its way, but like everyone else, we didn’t really believe it would end up the way it did. Going through March was fairly normal up to the 20th. It then became apparent there would be some kind of lockdown and the work just stopped. There were piles of work that were never completed because our staff had to leave. It was quite abrupt. It certainly wasn’t a slow wind-down. Within the space of a week, we went from normality to nothing.”

Past – At that point, how did you think it would play out?

“From the start of March, we knew something was coming but hoped it wouldn’t be as bad as what they said it would be. We were certainly hoping to stay open in some shape or form and for other businesses in St Andrews to stay open to give us demand for print, but it didn’t pan out that way.”

Past – Did you furlough your staff at that point?

“On Monday 23rd that was it – the staff left. At that point the furlough scheme wasn’t up and running, so it was a case of out you go and a couple of us shut up the building over the course of that week. We didn’t know at that point when we were going to reopen. When it became clear we could go for the furlough scheme, we furloughed everyone. It wasn’t even worth me coming in because there was nothing to do. The whole town had shut down.”

Past – The period before the furlough scheme was announced must have been very stressful.

“Yes. Before the furlough scheme was announced… bloody hell. We were doing our cash flow projections and realised how quickly we were going to run out of cash. Even with 10 people, that’s a fairly decent wage bill.”

Past – When you were in full shutdown, did you have any thoughts about marketing?

“We didn’t do anything initially because we were in a state of shock. I was in contact with my main customers via email but a lot of print buyers and marketing people were being furloughed, so in terms of communication, sometimes it wasn’t possible. It wasn’t until we reopened again that we decided to do anything social media-wise. In the middle of it all, there was a black hole.” 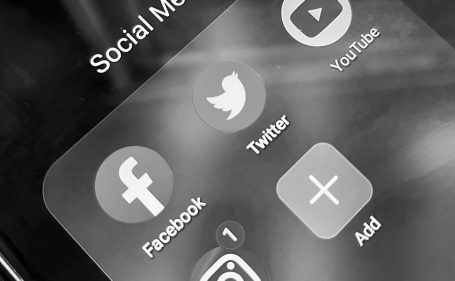 Present – But now you’re back with a skeletal staff, and a new social distancing signage offer.

“It won’t be a massive part of our sales programme going forward because it is such a saturated market, but we’ve had quite a few orders from businesses that wanted personalised stuff showing their logos rather off-the-shelf graphics. It will form part of our marketing and when we reach out to our customers, we’ll let them know this is something we can do.”

Present – I suppose it’s a process of adaptation.

“Initially it was Claire who said we should go down the route of getting some product and putting it out there. At first I didn’t like the idea, but when people go back to work, that’s going to be their starting point – what signage do I need? I wanted to get back to doing nice brochures or leaflets, but the reality is we would be missing out if we didn’t offer a covid package of some kind.”

Present – What response did you get and did you pick up any new clients?

“We’ve picked up one or two, but its predominantly existing customers so far. It’s a balancing act – you want to bring in work to get going again, but not too much because we’re not sure when we’ll have all the staff back.”

Present – Did you have a marketing strategy for your return?

“It was based around social media informing the local community that we were back. We are a community printer; our market is St Andrews and the surrounding area. Through social media, we can usually reach a lot of our customers. I’ve also emailed all my customers personally, so it’s been a very personal approach. From a marketing point of view, it’s been softly softly – just letting them know we’re here.” 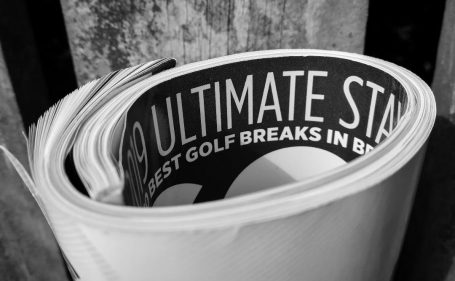 Future – … ready for the much-touted ‘bounce back’.

“People will definitely have to rethink how they promote themselves when and if that happens. On top of that, there’s a hope around St Andrews that after all this is done, there’ll be a good will that perhaps wasn’t there before – where people actively support local businesses. Maybe people who would have bought online before coronavirus might think about using local businesses that could do with their custom. If you want your local businesses to be here for another year, you have to use them. Hopefully we can benefit from that as well.”

Future – Have you considered how your marketing might change in the future?

“We’ll need to up our game. To get new customers or to even get the most out of our existing customers, our communication has to be better. Like a lot of businesses over the last 20 years, we’ve done pretty well and a lot of that has been organic. Looking forward, there’s going to be a significant drop in sales naturally and to recoup that, we’re going to have to work harder. That could involve using social media more or developing more sophisticated campaigns to fill that void.”

“It will be, but because things have been so difficult, you have to think about what you have to do today and to be positive. And then get up the next day and be positive. I suppose at some point, we’ll need to sit down and plan it out and that will probably be when we know what we’re left with – what Ground Zero is. At that point, we’ll know where our level is and we can start thinking about what we can do to get the business back.”

Future – I suppose there’s also a balance to be struck between bringing in new work and bringing back your staff.

“I’d rather keep the staff on because if you want to bounce back during 2021, you’ll need your staff. Going from 10 people to six, for example, and then suddenly getting a load of work in next year; you could be stuck trying to attract new skilled people. Getting skilled staff is never easy, so we’ll try to keep our staff on the best we can.”

West Port Print & Design was established 30 years ago. It started with three members of staff and two small, single-colour presses. Today, West Port operates a Ryobi 524 four-colour press as well as a two-colour and two single-colour machines not to mention a Ricoh Pro C7100 digital printer and Epson large-format kit catering to local brands such as the R&A, St Andrews Links Trust and the Old Course and Fairmont hotels.

This interview-based blog picks the minds of some of the leading voices in golf, tourism, food and drink, travel and journalism. If you have found it interesting, please Like, Follow and Share. If you have any questions about the blog or would like to talk to someone about PR, marketing and communications, please contact us on info@thewordassociation.biz

Check out the previous Past Present Future blogs –